New Year's Day 2013 in search of Waxwings and Redwings

So the New Year has finally arrived and I have to say that I was rather glad to see the back of 2012.
New Year's Day dawned and although it was hard to leave our lovely warm bed, knowing there would be no heating (the boiler packed up a couple of days ago - ****!!), a look out of the window promised a bright and beautiful day. I couldn't remember when we last had some sunshine so it was decided - the first day of 2013 would be spent birding. I'm not a twitcher so getting lots of 'year ticks' on the 1st of January is not a priority - in fact I don't care how many birds I see every year. I just want to see loads of them, common or rare, old friends or 'lifers'. I love 'em all!
So where to go? A sunny bank holiday meant that favourite spots like Pulborough or Warnham would be packed. Plus - this is a waxwing winter. We saw 8 waxwings in Croydon at the end of November and missed the Pulborough and Lewes ones in December. I just can't get enough of these Scandinavian beauties. So that's what I wanted to see! The two options therefore were Lewes again (where I knew a lot of Sussex birders were headed) and a flock of about 30 waxwings at Ash Vale, Surrey. I was also hoping to finally get really good views (rather than brief or distant ones) of redwing that I knew had also been seen and photographed there. They do like the same berries as their feathered compatriots. So Surrey it was.

When we got to North Camp Station, only a couple of birders and photographers were looking at bushes laden with red berries - but no birds. We were greeted by the dreaded words "You here for the waxwings? You just missed them". Grrrr! But, knowing waxwings fairly well and having spent hours waiting for them in the past, I knew that patience usually pays off. I could also hear redwings calling although it took a while before one actually showed itself but flew off again before I could take a picture.
A few blackbirds were feeding on the berries and a cormorant, a sparrowhawk and goldfinches flew over. 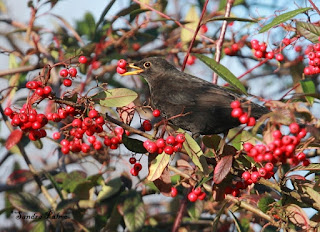 The waxwings had first been reported 4 days before Xmas and had been seen every day ever since - and still there were loads of berries left! So although one photographer said that there are more berry trees nearby that the flock might have flown to to feed, I remained hopeful.
And sure enough after an hour and a half of staring at the trees (only half the time we waited at Croydon and it was much colder then), the waxwings appeared and settled in trees near the bushes. I counted 24+. Yay! 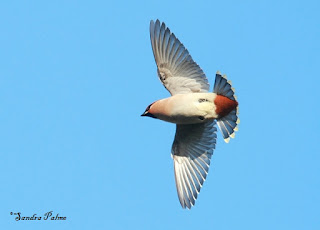 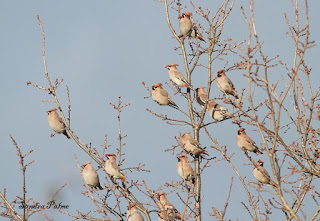 What a wonderful sight!

They then spent about 30 minutes sitting in the trees, as waxwings do, trilling to each other and occassionally swooping down to feed on the berries - mainly in small groups of  3-5 at a time. They tended to land on the other side of the bushes so photo opportunities were limited. Plus, several birders and bird photographers decided to walk right up to the bushes which did not exactly encourage the birds to land on 'our' side to feed. And clouds had appeared - typical! But I'm not complaining. 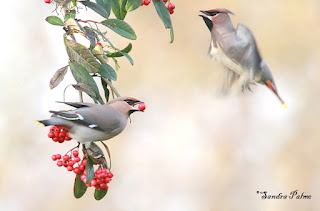 As always, it was a special treat to watch these beautiful winter visitors. Here's a selection of photos I managed to take: 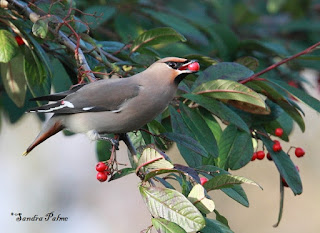 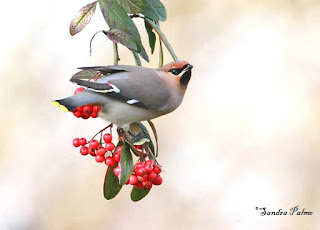 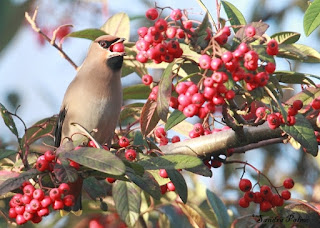 Waxwing heaven!
A bit grainy due to lack of light but still an unusual shot I thought is worth sharing. 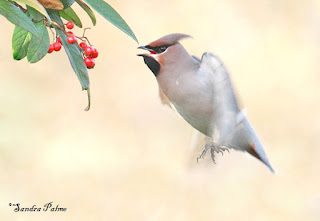 Then the waxwings were spooked by a lorry and flew off and most of the other birders left as well. We didn't, as a redwing that had shared the berry bush with the waxwings, perched on a twig about 4 metres from us - and stayed there. And stayed. And looked at us the same way we were looking at it, admiring its beauty (well I don't know what the redwing was thinking but while it certainly wasn't admiring us, it didn't seem worried which was great). Wow! The best views I'd ever had of a redwing. I was absolutely delighted. The bird had a few berries and continued to just sit and watch us and was completely relaxed. SO lovely! 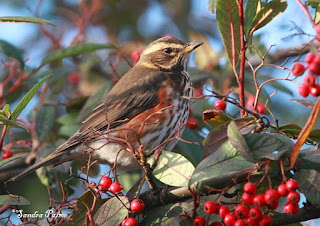 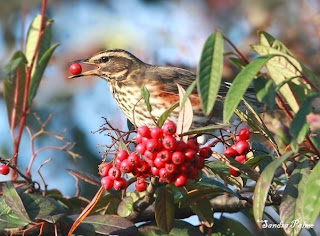 A really great start to a new birding year and I'm looking forward to every single bird I might get to see and photograph in 2013. Bring it on!

Love your Waxwings and Redwing. Saw my first Waxwings at Lewes on Tuesday, beautiful birds. http://colinknight.blogspot.co.uk/2013/01/waxwings-in-sussex.html

Thank you very much for your comment, Colin! Yes, fantastic birds. :) I'll visit & bookmark your blog shortly. Please do visit again if you'd like to! :)

Once you see Waxwings you never forget them :)

Very true. And you can never ever get enough!! :)

Love the Waxwing and Bearded Reedling shots; off to WPOTY on Tuesday so may call in to Hyde Park if get time. Leigh