Last weekend, when some sunshine was forecast, we decided to visit a pair of Dartford warblers on one of the smaller Surrey commons. Waiting patiently on the footpath, close to some gorse bushes that they had been seen in, we soon heard the male saying hello to us (well, more like "rrrrrrrrrrraaaaa" - I love a Dartford's contact call, sounds a bit like a grumpy raptor to me!). He duly appeared on top of one of the gorse bushes...a very beautiful sight especially now that the gorse is coming into flower. 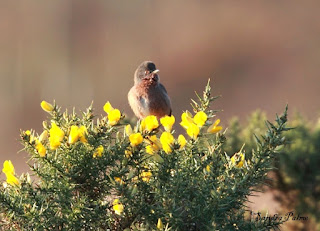 The female was also seen and flew towards us, calling, before she disappeared in the mature heather next to the path. We then waited another hour or two and saw nothing apart from a pair of stonechats...and lots of clouds coming in. Grrr! The wind was freezing and it actually started snowing. We had just decided to leave when - rather unexpectedly - the sun came back out and the light was just about perfect! And believe it or not, we were rewarded for our patience (which is not always the case, as most birders and bird photographers will be able to confirm!)...the little bird perched on top of the gorse again and started displaying. I could not see the female anywhere - it was as if he was displaying to US, calling, doing a little dance and showing us his beautiful tail feathers. 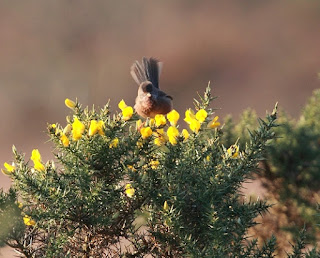 WOW! I have seen Dartfords in Sussex, Hampshire and Surrey but never witnessed this behaviour before. 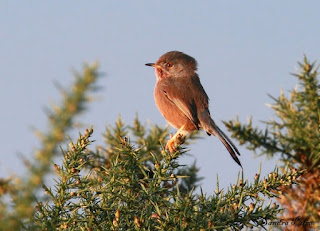 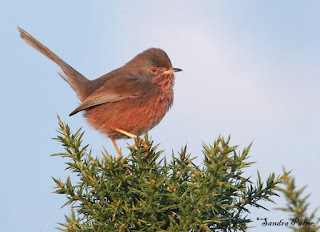 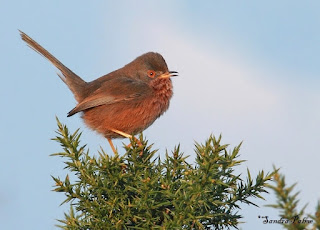 Such a treat to see these little beauties, they're so vulnerable. This is also why I cannot disclose the exact location of this pair of Dartfords. Every single bird is important for the survival of the species...let's hope they'll be able to hang on in England for many more years to come!

I thanked the 'Darties' for showing so well and allowing us take some lovely photos (yep, I really do that!). We then moved on to Thursley Common. I still hadn't seen the great grey shrike! At least one shrike spends the winter there every year, hunting small mammals and birds. As the title of this blog suggests, I got lucky that day - again! First the Dartfords, then the shrike. Not bad!
While watching a large flock of meadow pipits, a great spotted woodpecker-sized bird flew into one of the few large trees on Shrike Hill (yeah, where else). We first thought it was probably a GSW - we had seen one around - BUT I was fairly certain the bird had looked a little more compact, with a longer tail and greyish plumage. However, as it was the bird I was hoping to see, I didn't trust my first impression...wishful thinking can make you see amazing things (that then turn out to be something completely different and rather common)! So we waited for the bird to show itself...and guess what, when it flew towards another tree it really was the shrike! Lucky or what! While it is no secret that it can be found around Shrike Hill, it is very mobile so it is rather hard to predict where it might turn up - and the area is massive.

A fantastic day!
Posted by Sandra Palme at Saturday, January 19, 2013

Thank you for your comment, Hannah - glad you enjoyed reading my blog post. :) Please do visit again.