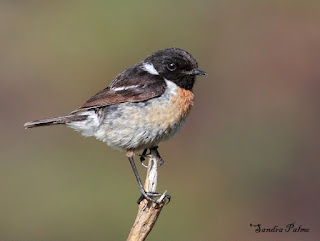 The lack of blog posts doesn't mean that I haven't been out and about watching and photographing birds whenever possible. 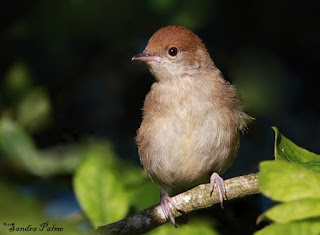 Stonechats, Redstarts, Spotted Flycatchers and Sand Martins were some of the highlights during the summer and, as always, it has been a great joy 'meeting' the new generation, such as the young blackcap pictured above.
More new shots can be found  here (including a couple of nice shots of a female bullfinch that I'd been after for years!): New Bird Photos

So maybe no 'unusual' birds since the wryneck at Pulborough Brooks in May (there is in fact one present again right now!) but I love watching house sparrows and finches and all of the 'common' birds - I don't need a rare migrant in order to come home with a smile on my face after a day's birding.

Having said that - while I'm not a twitcher - I do of course want to see 'new' birds whenever I can. When a hoopoe was reported at Farthing Downs, Coulsdon (Surrey) - which is only about 45 mins from here - I obviously really really wanted to see it. It's such an unusal bird with its long bill, brilliant crest, pink/orange plumage and black-and-white wings that it really is a bird that any birder wants to see. It was first reported on Sunday 14 August and then relocated on the Wednesday. I wasn't able to go until Friday and was very lucky - it was still there! A lifer for me and what a FANTASTIC bird. It wasn't very confiding but seemed fairly happy to be watched from a sensible distance. It was spooked by dog walkers, joggers and  a very territorial kestrel every now and then but kept returning to its favourite spot along the main path. A magpie appeared and seemed very interested in the unusual visitor, just like us birders! It kept edging closer to the hoopoe until they both seemed to be exchanging greetings before feeding next to each other. Brilliant behaviour to watch! Here's some of the shots I got of the hoopoe: 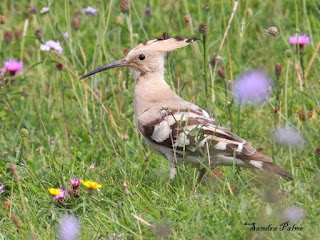 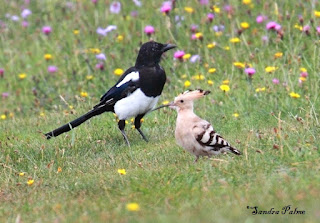 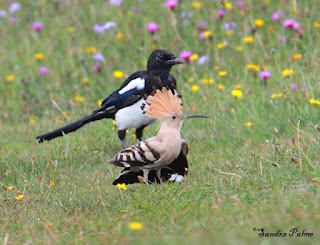 Still haven't seen a whinchat - and they're all over the South Downs at the moment (there was one at Coulsdon but not when I was trying to find it!). I have HEARD a grasshopper warbler but not seen one. Oh well, I WILL see these birds and many more I haven't seen yet despite trying to. Something to look forward to! :)
Posted by Sandra Palme at Wednesday, August 24, 2011