Spring is my favourite time of year - first all the migrant birds come back and sing, and then the new generation appears.
In my own garden, I have had two juvenile dunnocks, at least six baby house sparrows being fed by their parents and, since yesterday, three lovely and cheeky young starlings. They beg for food the whole time - they even tried to get a blackbird (also busy collecting food for fledgelings) to part with its food. A joy to watch!!
When I heard about two little grebe chicks that had successfully hatched not too far from here, I just had to go and see them. They are SO cute (so are adult little grebes!). I had also been after a shot of a little grebe riding on the adult's back for a long time - but obviously not an easy photo to get. Little grebes can be rather secretive and are very fast swimmers.

When we arrived at the site, the grebes were nowhere to be seen. No shortage of baby birds though!
There were two pairs of greylag geese with several goslings
﻿
﻿

After a couple of hours I finally spotted the two little grebe chicks. Interestingly, no adults in sight but a black-headed gull that showed too much interest in the little ones...luckily, they managed to hide in the reeds and the gull flew off. Phew! 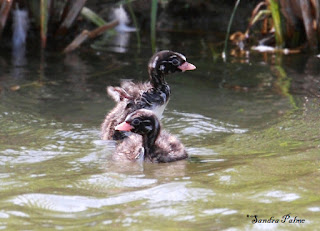 Here's a shot of the two grebe chicks, one doing a penguin impression.

Oh and I've also got an adult grebe for you doing a balloon impression! :) 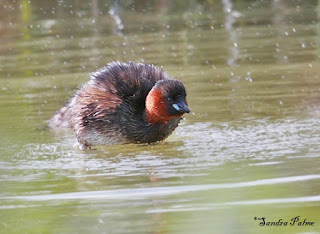 Anyhow, a few minutes later, an adult grebe appeared with a big fish. No idea how the tiny chicks managed to swallow it!
﻿
﻿The adult then swam off and returned with another, much smaller fish a bit later. And this time the chicks followed the adult and tried to climb up on their back (you can't tell whether this adult is actually a male or female). I think they are getting a bit too large now to be doing this but I was lucky - one did manage and I got a couple of shots. The light wasn't brilliant, either too dark or - when the sun came out - it was a bit harsh. Well always something wrong with 'the light' isn't there. ;) 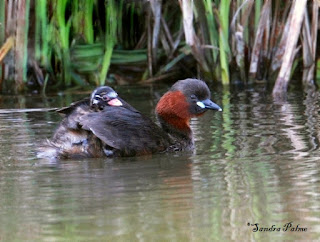 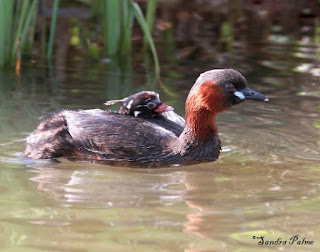 What you think is the adult grebe's rump is actually the second chick's bottom - it didn't manage to climb up onto Mummy or Daddy's back!
So I'm really happy I got to see this special behaviour and got a couple of shots to look at and share with you as well.
Posted by Sandra Palme at Sunday, May 15, 2011