As it was sunny this morning, we decided to pop down to Pagham Harbour, hoping we might find an early migrant or two. We first checked out Pagham Spit where we found a red-breasted merganser (drake) and a little grebe - two firsts for the year. 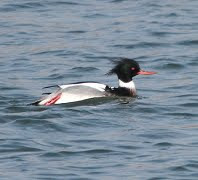 Not much else of note - apart from 100+ dark-bellied brent geese that were put up by a Royal Navy helicopter.

We then moved on to Church Norton, where the first two birds we spotted were a redshank and a curlew. When I looked up, I couldn't believe our luck: a female kestrel was hovering right above us, looking for prey. We had cracking views and watched this beautiful bird for about 20 minutes. Despite several attempts, she didn't catch anything while we were there. I managed to get a few nice shots that I will add to my gallery asap. 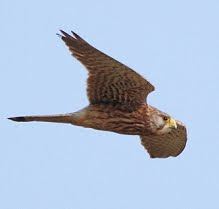 We still hadn't seen any migrants (I had hoped there might be a wheatear around somewhere) when I heard a familiar alarm call: the first chiffchaff of the year! It was feeding in the shrub and was in very good condition. Lovely! Roll on spring! Near the Severals, we heard a Cetti's warbler and then walked down to the beach, where we saw oystercatchers and had lovely views of a couple of turnstones. 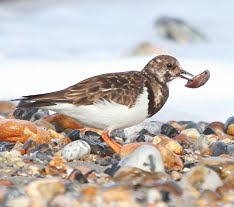 On the way back to the car, we saw a pair of teal (beautiful!) and a curlew flew over. The kestrel was still hunting in the distance.
A lovely day!
Posted by Sandra Palme at Monday, March 14, 2011