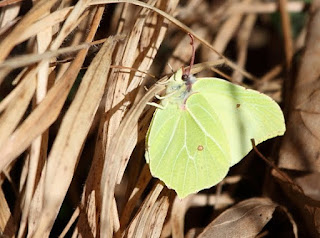 We had a great day out birding at Arundel (West Sussex) yesterday. Finally some sunshine! It really felt like spring. I saw a butterfly (brimstone, see above), a bumblebee and some snowdrops (first ones I've seen this year!).
We first went to Swanbourne Lake to look for the two firecrests that were reported last week. I saw my first ever firecrest at Arundel WWT last year - so I guess they're wintering birds from the continent that really like the area and return every year.
As we'd dipped on waxwings several times in the last two weeks (every time when we got to a place where they'd been seen, they were gone or, at Epsom, ONE was there as we drove past but had disappeared when we got there with our cameras), I was not really too hopeful.
But we were lucky this time! We soon heard the call we were hoping for. At least two firecrests (at one point I'm fairly certain I saw three) were flitting around ivy, looking for insects. Fantastic little birds! One male was calling and flashing his bright orange crest. Brilliant.
Firecrests are very active little birds so it is extremely hard to get a decent photo of them. I'm really pleased I did get a few shots. This is one of my favourite pix: 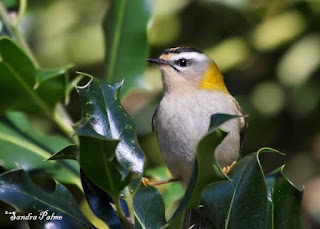 We also saw a couple of goldcrests, chasing each other. One was also displaying, showing his yellow/orange crest: 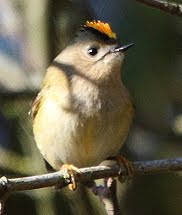 We then had lunch at Arundel WWT and had a walk around the centre but didn't see much. From the car park later, we saw two distant peregrines in a tree and up to four buzzards circling above us. A majestic sight! Here's one of the photos I took: 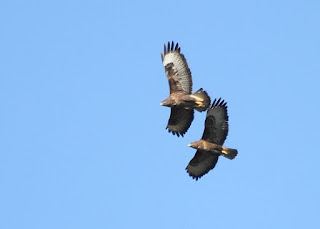