Last Sunday, we went to Church Norton. Some good migrants have been turning up there in the last couple of weeks, including wheatear, whinchat, pied flycatcher and even a wryneck. Unfortunately it was very windy so any small birds that might have been around were all hiding - I only saw one chiffchaff. While watching a lot of swallows, I missed a sandwich tern that was flying right above my head (would have been a first for me!) - I saw a photo of it later that my partner took who was stood next to me. Oh well, a great start! Was this going to be another frustrating day? A trip to Seaford Head and Pulborough Brooks last Wednesday had been fruitless - I saw no migrants at all apart from two VERY distant wheatears.

On the beach, there were a few turnstones, curlews and oystercatchers - they were not willing to pose for a few photos. Great. And SO windy! Makes it VERY hard to handhold a heavy camera and lens!

When I was just about to give up, I scanned the beach for about 5 more minutes - and finally, there was some movement. A lone first-winter wheatear! 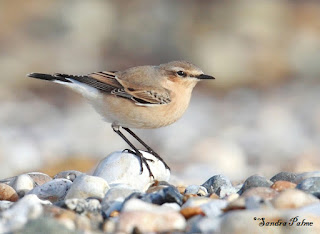 So the next few hours were spent trying to get closer to it without chasing it. It seemed to be getting used to me after a while, and I ended up just standing in the same place for a long time, after finding out which spots it preferred for feeding. And it eventually came to me, sheltering from the wind nearby, looking at me. The best shots I got when it was feeding behind the sea defences. I tried to duck & hide - it would only have seen my lens. It was SO cute - when it heard the clicking noise it came running (!) right up to me - it was only about 2 metres away from me - looking at me as if to say 'What ARE you doing there, silly - I do know you are there! Go on then, take a few shots.' :) Made my day!
﻿

For more photos of this wheatear and others, click here: Wheatear photos
Posted by Sandra Palme at Thursday, September 15, 2011